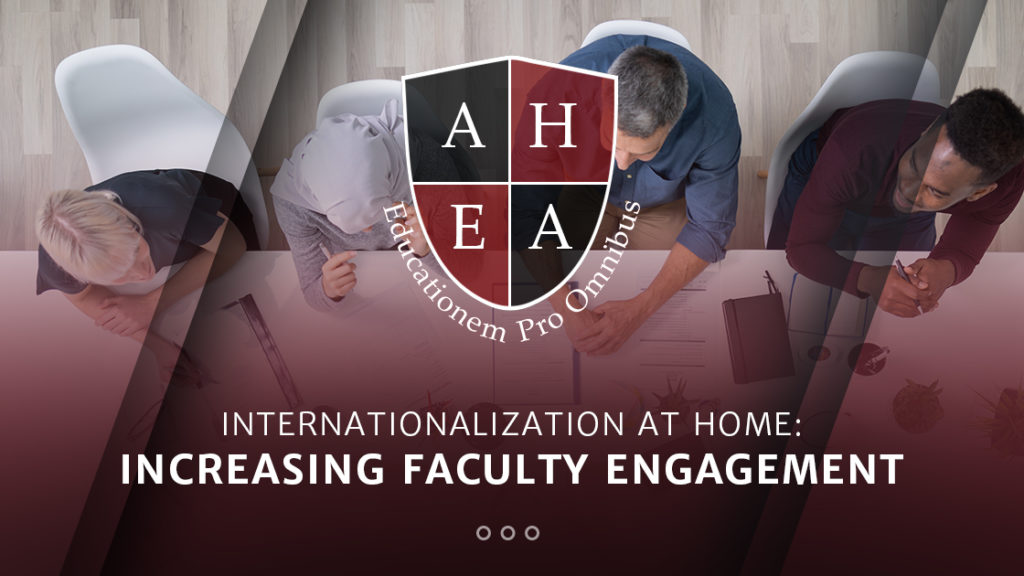 Previous articles in this series have described recent internationalization initiatives in the area of co-curricular activities and the development of globally-networked shared courses. Attention shifts here to the subject of faculty involvement, a factor which, for many, is a matter of fundamental importance. In a work for example tracing his experience as a faculty member and international education administrator at several large American research universities, Michael Stohl makes the provocative claim that ‘the chief challenge for developing and sustaining internationalization is the engagement of the faculty’ (Stohl, 360).

In the past, faculty engagement was viewed principally from the standpoint of student mobility and, accordingly, tended to lay stress on encouraging greater faculty participation in study abroad programming. More recently, faculty have been encouraged to take part in a much broader set of internationalization endeavors, including the revision of syllabi and curricula with an eye toward the promotion of intercultural competencies; greater engagement in international research collaborations and globally-networked course development; and the adoption of pedagogical innovations intended to improve the classroom experience of visiting students.

Research surveys tend to suggest that faculty are favorably disposed to the goals of internationalization, if their actual involvement in such undertakings is often portrayed in the same reports as sporadic. Readers will in fact find a large body of works devoted to the subject of examining this situation and issues which have hindered faculty engagement to date. Typical are the observations of Patricia Dewey and Stephen Duff, who, in the course of a study conducted on internationalization efforts in the School of Architecture and Allied Arts at the University of Oregon, found that there were four chief barriers to faculty participation in internationalization efforts. These are summarized as follows:

The authors cite a number of issues here that recur frequently in similar studies. In general, research on the subject at hand, much of which comes admittedly from the faculty side of things, tends to suggest that faculty engagement in internationalization would benefit greatly from additional attention to the issue of monetary and non-monetary support. Typical are the comments of John Criswell and Hao Zhu when summarizing their finding from a survey involving 366 faculty at the University of Missouri, Westminster College and the University of Saskatchewan: ‘International initiatives,’ they write, ‘are often seen by faculty members as additional work with little or no benefit’ (Criswell and Zhou, 24). The authors go on to suggest ‘that the underlying reasons that faculty members do not engage in the international context is not because of a lack of desire’, but ‘a lack of resources and support’ (Criswell and Zhou, 36).

That said, readers may find that the emphasis falls on different forms of administrative support from one work to the next. For their part, Dewey and Duff appear to place stress on the need for greater administrative leadership and attach particular importance to the creation of an ‘international initiatives director’ (Dewey and Duff, 500). In doing so, they suggest that insufficient faculty engagement in internationalization efforts follows especially from situations in which the institution’s vision and goals in this area have not been clearly defined. They refer in sum to a need for greater direction.

Douglas Proctor makes a similar point when observing that ‘the most common barrier to the active engagement of faculty with internationalization derives from the variable understandings and multiple definitions of internationalization which are in use’. He goes on to say that ‘this fluidity in the ways in which individuals understand and make sense of internationalization, both among faculty and between faculty and their institutions, has been found to be a significant impediment to the international engagement of faculty’ (Proctor, 16). Proctor lays stress here on the importance of a planning regimen, one key outcome of which would be to provide faculty and other important stakeholders with a clear sense of where to concentrate their efforts. Such a plan would ideally specify which forms of faculty engagement (international research collaboration, virtual mobility, co-curricular activities, etc.) are most desirable or appropriate for the institution in question. It might also identify specific departments, divisions or schools which are best placed to lead the internationalization effort.

In addition to advocating an increase in the level of administrative support, other works on the subject emphasize the need for greater incentives. Specifically, as John Stohl writes in the work noted previously above, faculty participation in internationalization initiatives would likely increase if interests and credentials of this kind were included in hiring, tenure and promotion policies (Stohl, 368). A similar emphasis on the creation of a ‘reward structure’ to promote faculty engagement is echoed in reports issued from the American Council on Education (ACE). Typical are the proposals advanced on this front by Robin Helms and Alegneta Asfaw in the Engaging Faculty in Internationalization series.

ACE research reports, such as the widely read Mapping Internationalization on U.S. Campuses, also provide a picture of how extensively the faculty engagement initiatives identified above have been put into practice. In the case for example of hiring trends, 47% of responders to the most recent (2017) Mapping survey reported that candidates with international interests or credential were ‘occasionally’ or ‘frequently’ favored in hiring decisions (up from 40% in 2011). The ACE further reports that approximately 10% of institutions now include international work or experience as a consideration in tenure and promotion decisions. Growth was modest here as it was also in the case of the inclusion of international engagement as a factor in faculty awards (11%). It is also important to note that results varied considerably by institutional type: Doctoral institutions were most likely to lead the field, with 24% of the latter factoring international engagement in tenure decisions and 35% in recognition and awards (Helms et al, 21).

The authors also found that levels of institutional support for faculty involvement showed some increase over previous years, although this tended to take the form of greater funding for mobility endeavors as opposed to ‘internationalization at home’ initiatives. In the words of the report’s authors: ‘Mirroring institutions’ relative emphasis on student mobility compared to the on-campus curriculum, faculty professional development opportunities abroad are offered by more institutions than are campus-based and curriculum-focused opportunities’ (Helms et al, 22).

If, in conclusion, the authors of the Mapping study find these trends encouraging, the data may also ‘suggest that as the prominence of SIOs (Senior International Officers) has increased, the perceived influence of faculty may be diminishing’ (Helms et al, 25). The concerns expressed here recall the comments made on the part of other writers cited above and in previous AEHA research reviews; namely that successful internationalization depends upon a comprehensive set of mutually-reinforcing initiatives. In the words again of Stohl: ‘Although we may be able to provide mechanisms for student mobility, without the continuing engagement of the faculty that mobility will not only be less sizeable than it should be, but also, in and of itself, it will not deliver the learning, discovery, and engagement that we seek through internationalization’ (Stohl, 360).