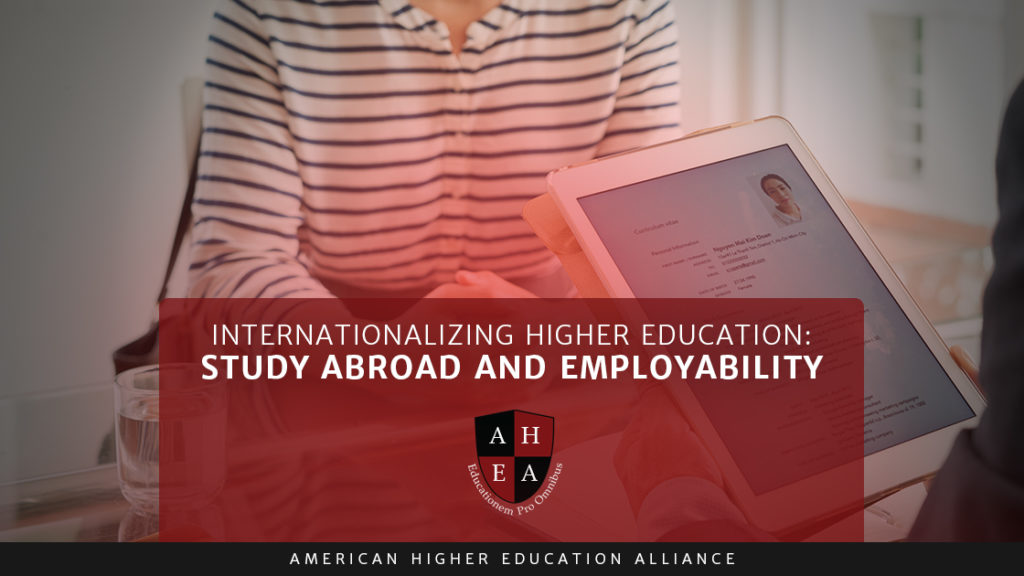 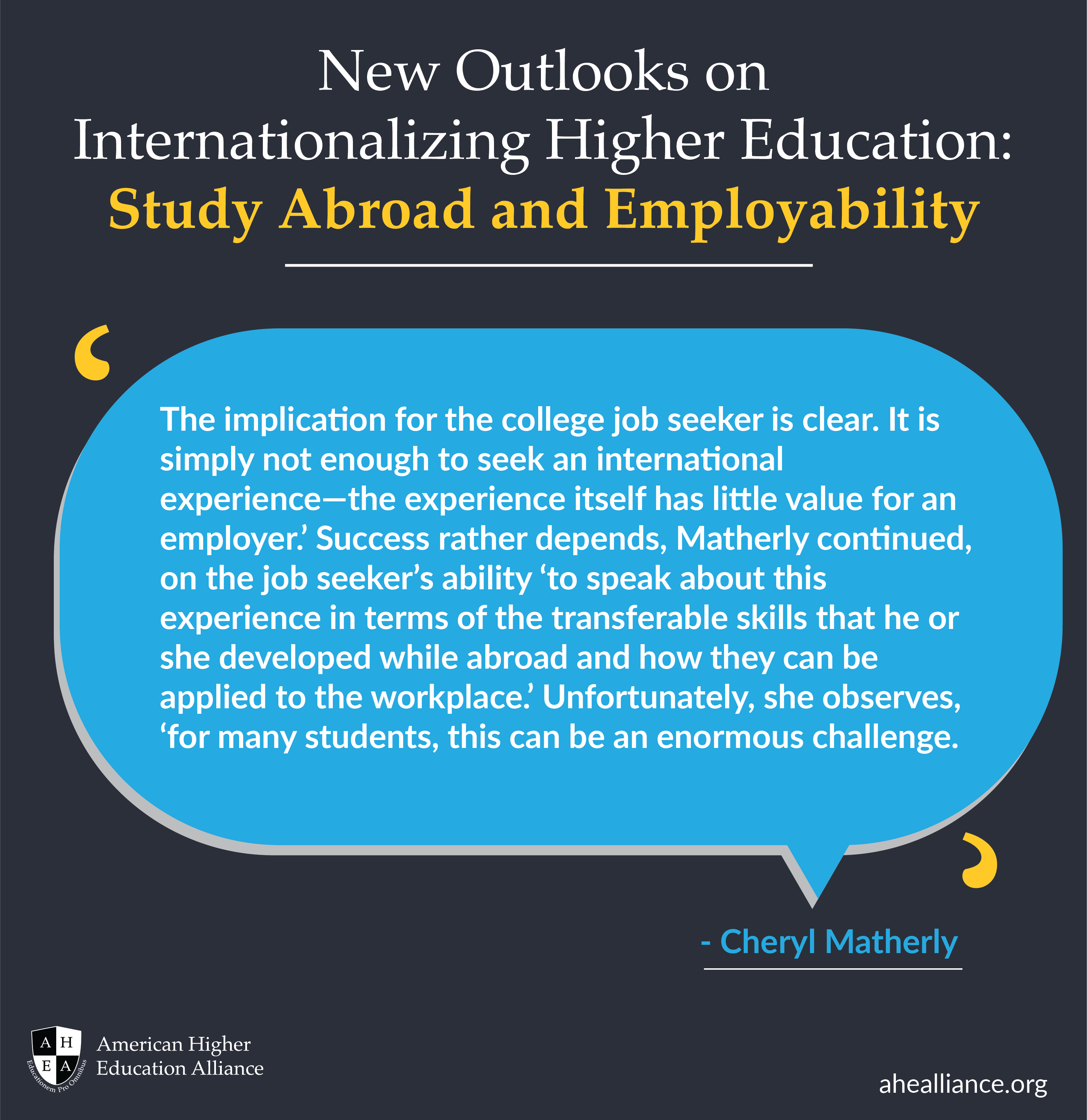 The present article reviews a number of recent studies which assess the impact of study abroad and related international experiences on graduate employability. In most cases, these works are based on surveys of human resource professionals, recruiters, and senior managers. The findings reveal in turn some considerable differences of opinion, although it does also appear that the state of research on the subjects in question is still at an early stage. That said, consensus also exists on a number of points and perhaps above all on the need for students to better communicate the benefits of their experiences to potential employers.

A number of recent studies directed toward ascertaining the importance of international experience in graduate employability often use a 2003 RAND Corporation report as a starting point or source of comparison. The RAND report was based on a survey of human resource and management personnel from 75 organizations with ‘global missions’ about their future personnel needs and the skills they were likely to look for in new employees. The researchers found that while the survey respondents often stressed the importance of ‘cross-cultural competence,’ they did not show great interest in study abroad programs or have high opinions of their capacity to promote skills of that nature. The authors of the study further noted that these views appeared to stem from reservations, voiced by some respondents, about the nature of study abroad programming and specifically their impression that ‘students often live in expatriate quarters, take courses from US university professors, and socialize chiefly with one another.’ (Bikson et al, 28).

With these results in mind, writes Cheryl Matherly, ‘the implication for the college job seeker is clear. It is simply not enough to seek an international experience—the experience itself has little value for an employer.’ Success rather depends, Matherly continued, on the job seeker’s ability ‘to speak about this experience in terms of the transferable skills that he or she developed while abroad and how they can be applied to the workplace.’ Unfortunately, she observes, ‘for many students, this can be an enormous challenge’ (Matherly, 9).

More recently, Jessica Turos and Carney Strange surveyed 304 recruiters from fields as diverse as business to social service organizations with the aim of discovering their attitudes towards the value of study abroad and similar international experiences (Turos and Strange, 97). Although their results were on the whole more positive than those of the RAND report, they found that ‘candidates with relevant internship experiences were more likely to be ranked as the recruiters’ number one choice,’ and that ‘study abroad alone did not seem to compensate for candidates with limited experience suggests that recruiters seek well-rounded individuals whose internship experiences offer an additional complement to their credential’ (Turos and Strange, 101). They further note that some recruiters were sensitive to the fact that ‘not all students have access to such opportunities,’ and indeed ‘seemed to suggest that completion of such a unique experience might be as much a function of candidate privilege as anything else’ (Turos and Strange, 101). This issue aside, they also found, recalling a problem cited by Matherly, that recruiters expect students ‘to demonstrate more clearly how they benefited from the international experience and what skills were gained in the process’ (Turos and Strange, 101).

Turos and Strange also report that ‘the value of study abroad’ was ‘likely to be especially appreciated by recruiters who had themselves taken part in such an international experience (Turos and Strange, 100). This connection has been observed by other researchers. As Stevan Trooboff, Michael Vande Berg and Jack Rayman similarly found in a 2008 study (discussed below) ‘not only did employers who had studied abroad in college rank all types of study abroad more highly than those who had not, but also the extent to which former participants valued all types of study abroad rose to very high levels of significance’ (Trooboff et al, 24).

In sum, Turos and Strange conclude that ‘while study abroad has some value in the marketplace, it is insufficient alone, and it is perhaps most persuasive when presented in combination with other experiences and carefully examined for learning outcomes accrued’ (Turos and Strange, 101). They close by emphasizing again the need for students ‘to demonstrate more clearly how they benefited from the international experience and what skills were gained in the process’ (Turos and Strange, 101).

One factor that might be cited in connection with the data obtained by Turos and Strange is the fact that only 13.2% of the recruiters surveyed ‘were employed by multi-national organizations’ (Turos and Strange, 100). This may have a significant bearing on the results: As stated for example in another recent study, ‘the greater the firm’s internationally generated revenue, the more likely that its employees value all types of study abroad’ (Trooboff et al, 21). This was one of a host of findings produced from a survey of 352 human resource professionals and senior managers from employers who hire undergraduates for entry level positions. The authors further sought to assess whether ‘undergraduates who study abroad have an advantage over those who stay at home,’ along with the ‘commonly held’ belief  ‘that CEOs and presidents value studying abroad more than the human resource professionals and others in their firms who make the hiring decisions’ (Trooboff et al, 17).

Their findings included the expected result that ‘employers, as a group, place the highest value on students’ academic majors when hiring—and the degree of preference they show for academic major in hiring for entry-level positions far exceeds any other educational experience listed’ (Trooboff et al, 20). That said, it is ‘clear,’ they continue, that senior managers and recruiters for entry level positions ‘have two significant preferences where education abroad is concerned.’ The first is that they believe that ‘the longer the program, the more value it has,’ and secondly, that they ‘place relatively high value on experiential learning—on programs that feature service learning and, especially, internship opportunities’ (Trooboff et al, 23). They go on to say that these results do not represent ‘an indictment’ of shorter programs or ones with less robust experiential learning components; however they do suggest that students ‘who have participated in relatively short-term programs, or in programs that didn’t include experiential options, will need to be able to describe their activities in ways that will convince prospective employers that their learning abroad has prepared them in other ways’ (Trooboff et al, 31).

In the case of the ‘conventional wisdom’ that senior managers look more favorably upon international experiences than recruiters, Trooboff and his co-authors found that ‘human resource professionals and others responsible for hiring value all types of study abroad more than senior managers, and they are more likely to believe that study abroad enhances desired qualities and skills.’ Echoing points made in other studies cite above, they believe that the ‘explanation for this lies […] at least partly in the fact that more than 15% of the non-senior managers responding to the survey had studied abroad (Trooboff et al, 29). However, the report also raised some concerns. They found for example that if employers ‘especially value “listening and observing well,” “adapting well to change,” “working well under pressure,” “analyzing, evaluating and interpreting well,” and “working effectively outside one’s comfort zone” […] they are not, for the most part, strongly convinced that study abroad enhances these skills (Trooboff et al, 29). This is a rather ironic outcome, if one considers the findings from a range of contemporary surveys of how study abroad alumni rate their experiences. These tend to show that participants in international education programs believe that they contributed greatly to their acquisition of such skills (See for example DeGraaf et al; Farrugia and Sanger; Franklin; Norris and Gillespie).

These points notwithstanding, Trooboff and his co-authors conclude that the results of their research highlight the need ‘for study abroad and career service professionals to give students some basic training in how to present what they have learned through studying abroad, in ways that employers will appreciate.’ They find unfortunately instead that ‘former study abroad participants are more likely to discuss the place where they studied, and aspects of local cultural life, than they are the sorts of learning outcomes—the specific knowledge, skills and perspectives they learned abroad’ (Trooboff et al, 30). These conclusions chime well again with those of Turos and Strange, who write in similar vein that:

‘The limited exposure to international experiences apparent among these recruiters (only 5.9%) also suggests perhaps a more intentional role for campus career services. If recruiters are seeking globally conscious candidates, and study abroad has proven to enhance such an outcome, the challenge becomes one of highlighting to employers the positive learning outcomes and benefits of such experiences’ (Turos and Strange, 102).

The works reviewed above present, in summary, a number of thought-provoking views on the linkages between international experience, skill acquisition and employability that certainly merit further research. Among the points particularly worthy of note is the emphasis placed by a range of authors on matters of communication and, specifically, the need for study abroad professionals and students to better articulate the benefits of such experiences to employers.