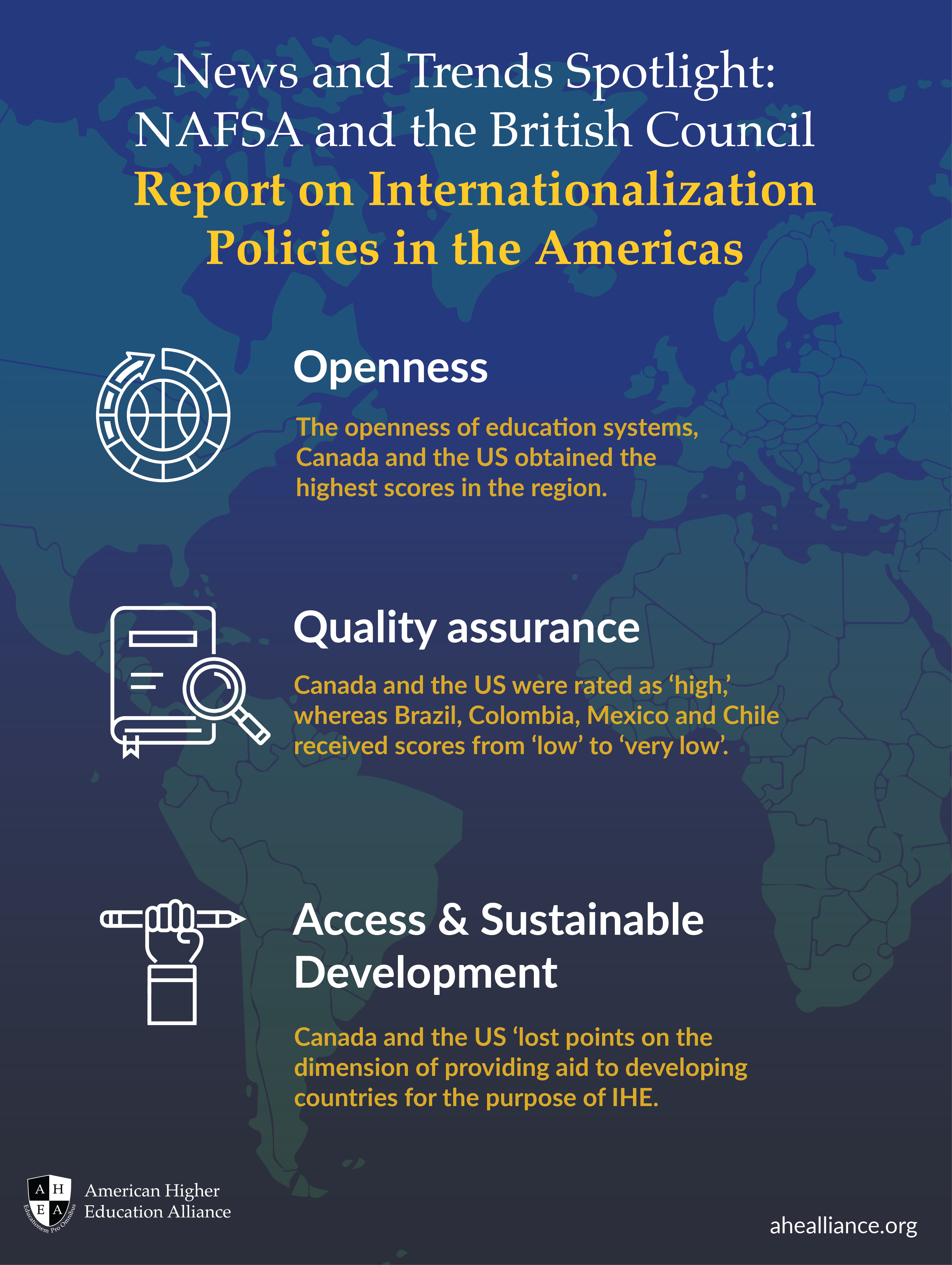 Highlights from NAFSA’s Annual Conference in May 2019 include the release of a new report, The Shape of Global Higher Education: The Americas. The study, produced in collaboration with the British Council, assesses the state of policies in support of higher education internationalization in Brazil, Canada, Chile, Colombia, Mexico, and the United States, with results from previous studies of selected countries in Europe and Asia also included for the purpose of comparison. Drawing on policy documents from a range of sources, the researchers sought to assess the degree to which each country met the following international engagement criteria:

The openness of education systems measures government-level commitment to internationalisation and support for international mobility of students, researchers, academic programmes and university research. It considers immigration policies facilitating the movement of students and academics, along with regulatory environments facilitating the mobility across national borders of academic programmes and institutions.

Equitable access and sustainable development policies draw on government funding schemes for student and academic mobility, and participation in global research. This category considers the unintended consequences of internationalisation, such as brain drain and displacement of marginalised students by international students.

In terms of openness, Canada and the US obtained the highest scores in the region. The researchers further note that where each loses marks, ‘it tends to be on subjects related to the decentralised nature of HE in each country: the lack of national governments signing bilateral agreements, lack of national standards for foreign institutions, and lack of national research authorities with an interest in tracking levels of international research collaboration’. Conversely, the scores of Brazil, Chile, Colombia and Mexico ‘mostly reflects the fact that they are still developing their HE systems and are less focused on internationalisation as a policy issue’. The openness score of these four countries was also affected by relatively low incoming mobility rates, a result which was partly linked to ‘lower levels of affluence’ and the presence of fewer ‘prestigious institutions’. As a result, all four countries ‘are net exporters of students’ and indeed ‘the number of outbound students exceeds the inbound students by a factor of at least 2.5’ (17).

In terms of quality assurance, Canada and the US were rated as ‘high,’ whereas Brazil, Colombia, Mexico and Chile received scores from ‘low’ to ‘very low’. The researchers suggest here that European countries tended to have stronger regulatory frameworks as exemplified by ‘the harmonised HE policies across the EU and the EHEA (European Higher Education Area)’. Latin American countries, in contrast, tend to be more focused on outbound student mobility and so, if some institutions have policies in place, ‘there is no formal regulatory framework’. Finally, if the scores for the US and Canada ‘may seem somewhat odd for countries with large numbers of high-quality universities […] their conception of how to manage quality assurance and the recognition of foreign credentials is very different from the European one’. They attribute this to factors such as traditions of institutional autonomy and a ‘lack of national academic authorities’. Foreign degree recognition is thus left ‘to a patchwork of provincial or state regulatory bodies and market-based solutions’ (32).

Turning finally to access and sustainable development, the authors found this to be ‘the one section’ where, as a whole, the Americas tend to match the other regions studied. In the case of the Latin American countries, ‘the displacement of vulnerable local students’ has not arisen as an issue given the low level of inbound student mobility. And if in turn the scores of Canada and the US suffered from an absence of anti-displacement and anti-brain-drain policies, ‘one could argue,’ observe the authors, ‘that neither of these policies are truly necessary in those countries: their funding systems allows HE institutions to add places if international demand is high and both are net winners in terms of brain circulation (the US especially), and so the question does not often arise’. That said, Canada and the US ‘lost points on the dimension of providing aid to developing countries for the purpose of IHE’ (33).

In sum, the researchers find that the countries under review ‘all rate slightly lower on our measures of support for international engagement in HE than other national systems with comparable levels of national income’. The factors contributing to this result are nevertheless quite distinct with respect to Canada and the US, on one hand, and Brazil, Chile, Colombia and Mexico on the other. In the case of the former, decentralization and ’market-driven’ traditions are deemed significant; in the latter, reference is made to factors such the state of higher education development and related issues. That said, the researchers believe that steps toward the creation of a ‘supportive policy environment’ would prove beneficial for advancing internationalization efforts in both parts of the region (35).